In line with our gallery's core programmatic approach, for Art Basel Online Edition we focus on female artists from different generations in a curated dialogue. All artists deal with the interplay of bodily action and identity in different ways. 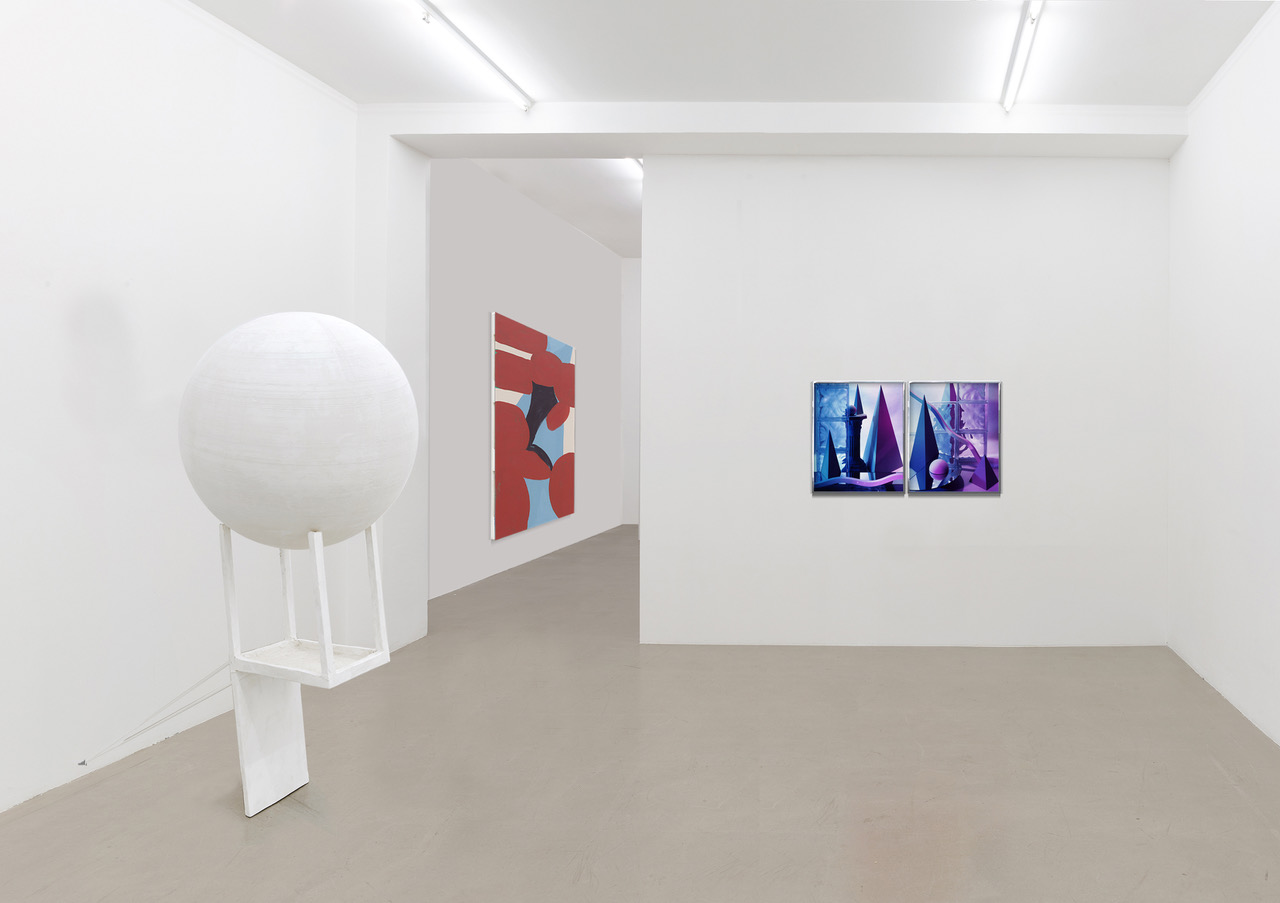 Inge Mahn's object „Balancing Ball “ from 2017 has been exhibited at her solo exhibition at Kunstverein Braunschweig in the same year and belongs to one of her most important body of works, the “Stühle” [“Chairs”]. They distinctly represent three basic principles of Inge Mahn’s artistic practice: First, “confronting the burden” (physically and psychologically), second, “natural laws are to be equated with the laws of interpersonal relationships”, and third, “seek the legitimation of art in the social sphere”. In this sense “Balancierende Kugel“ deals with the act of burden sharing, of supporting and being supported. Comedy and tragedy lie close to each other in Mahn’s oeuvre, like in real life. The artist sees her sculptures as “stops” in between; contradictions are not disturbances but complements.

“I create an order to understand, or rather: I try to grasp the order that lies behind things. I want to know what the interrelations are and experience orders that I only assume. The orders that contradict our agreements or suspend them, yet that function together with each other.” 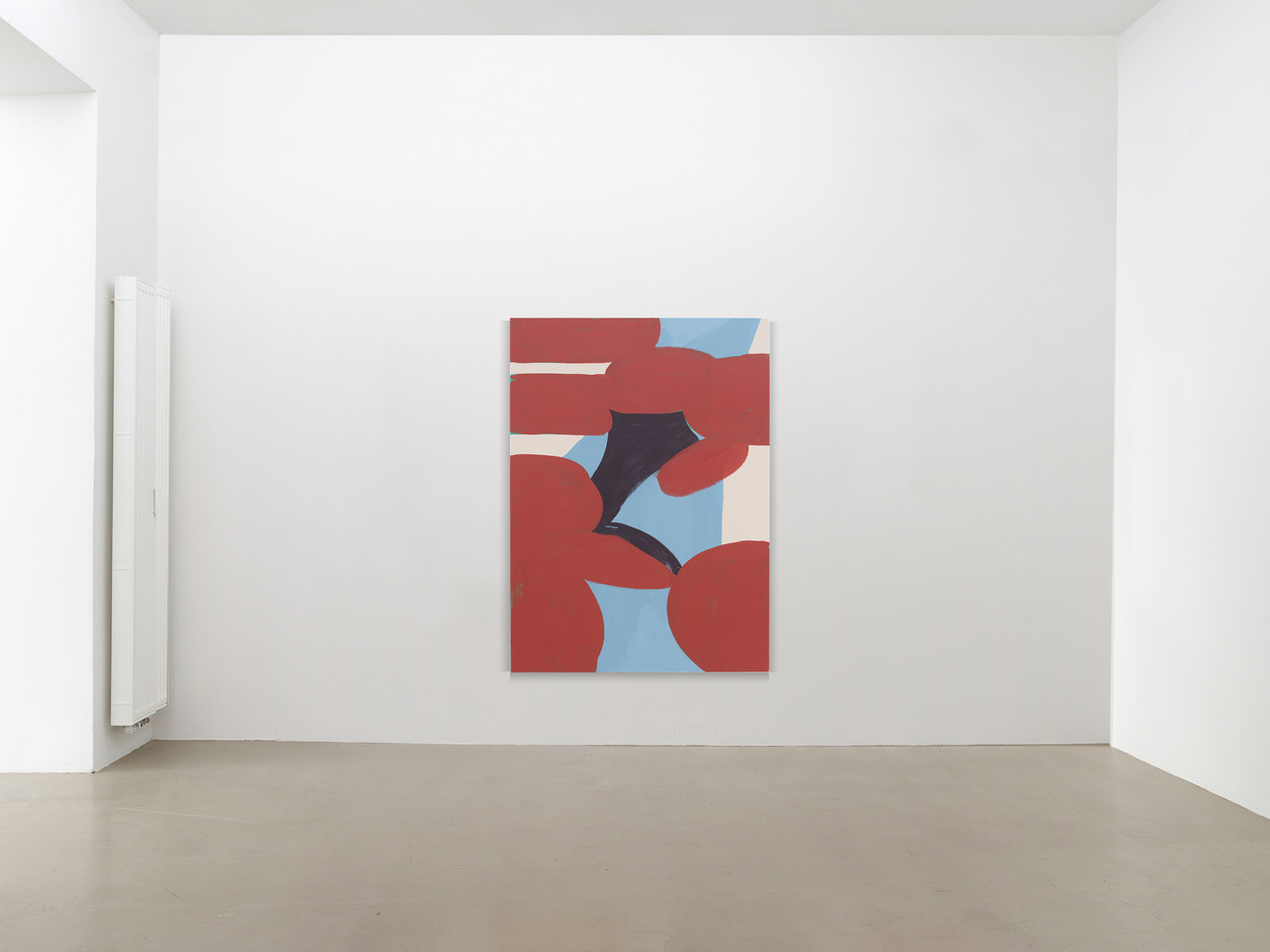 Since the 1970s, Helmut Dorner has been developing a stance toward abstract painting than one could describe using aspects of the Light and Space Movement and at the same time the objectness of Minimal Art. He was already invited to participate in the documenta X in 1997, and his works are included in museum collections such as the Centre Pompidou Paris or the Kunstmuseum Winterthur. In Dorner’s painting, light and space are central aspects that in each of his series play with the material qualities of color and the picture support. He grasps color as “factual materiality” that, depending on the light and spatial situation, can permanently alter a picture’s consistency. While Dorner’s preceding series of “oils” and “varnishes” played with the alternation of opacity and transparency, his new abstract acrylic painting forms a sort of “membrane” between innumerable layers of color that subtly shine through the visible surface and the actual ambient space—reinforced not least through the picture support made of wood that almost appears as an architectural element. 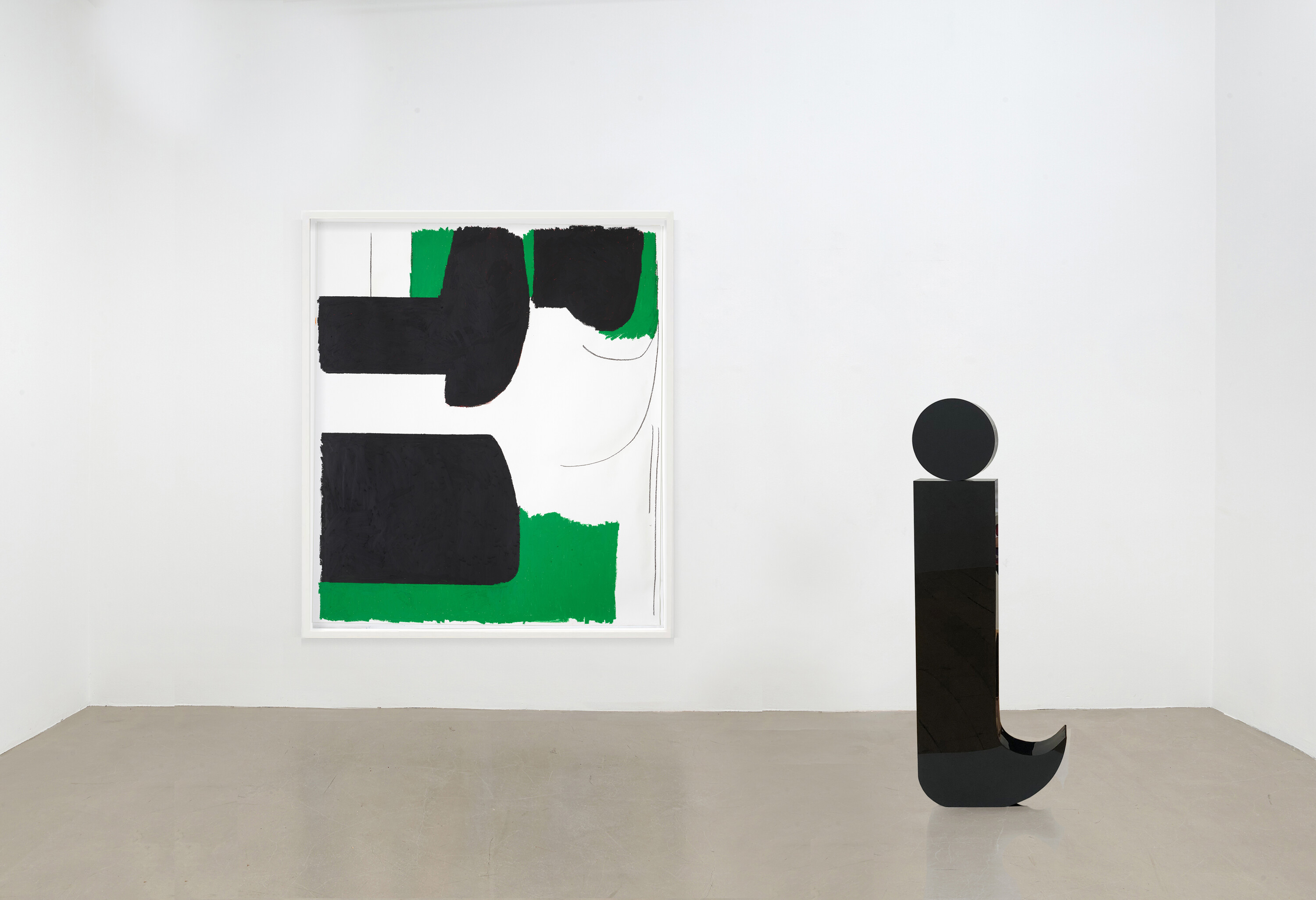 Esther Kläs’ sculptures and drawings are boths registers for the body. Her drawings are indexical signs of the absent figure. Movement in space is crucial to both, her sculptures and drawings which also capture her corporeal engagement with materials. She has characterized her drawing process as a form of „direct thinking“ which occcurs through her own movement in space. The drawings offer a form of embodied abstraction merged with intellect and intuition, rehearsal and action. Her works give rise to an ongoing dialogue between body and environment. This starts with the process-oriented engagement of their making like with adding, removing, drawing or pressing oil based ink, colored pencil, oil stick or pastell chalk on the drawing paper in a way that the drawing turns to an object. 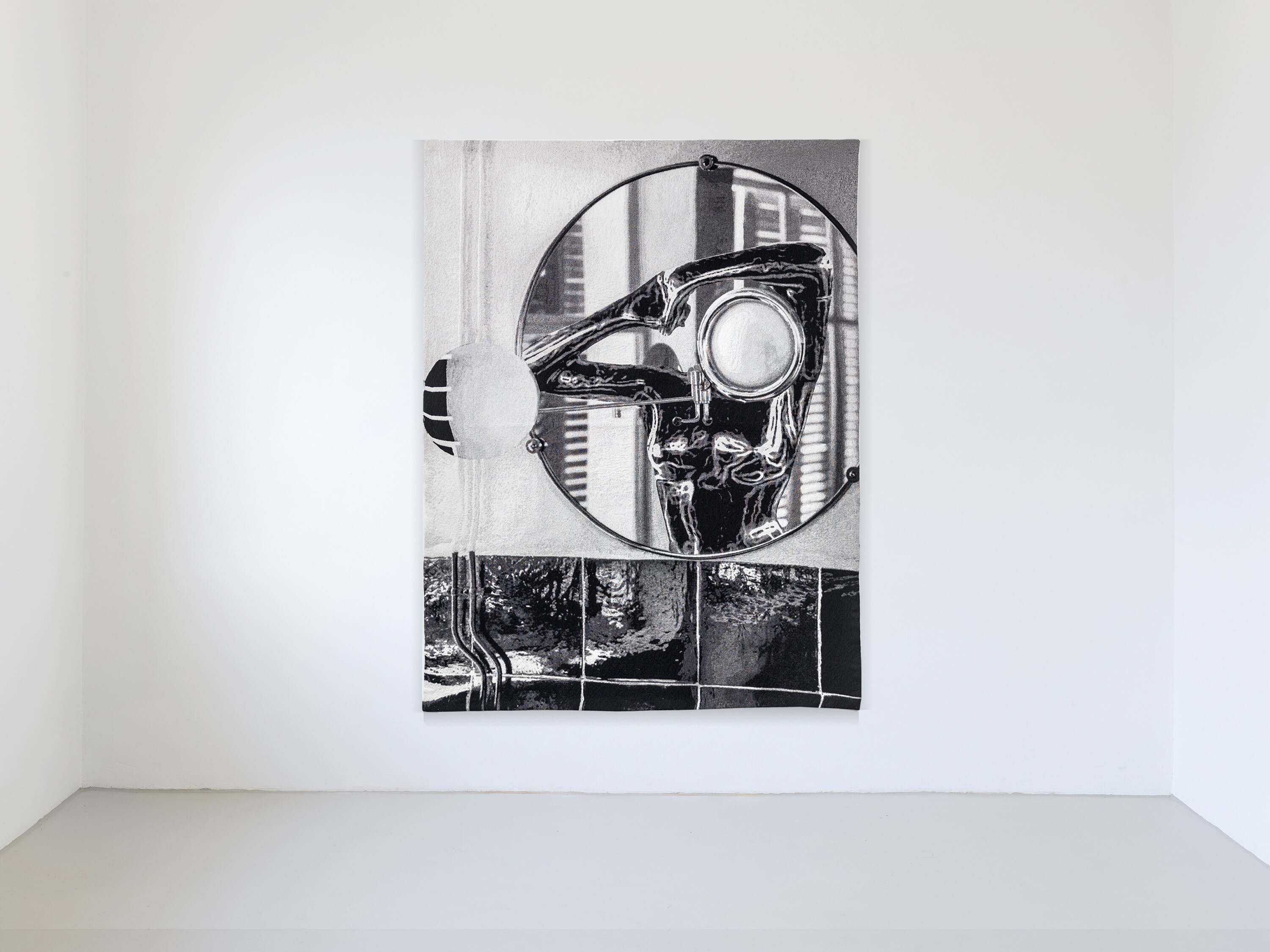 In Shannon Bool’s works the body becomes the central “area of the images”. Bool´s iconic new tapestry „Dawn“ combine the process of photography with digital image generation with the physical process of tapestry making in Jacquard technique. The motif is based on an imagery completely generated on the computer: a synthetic rendered figure, set in a modernist bathroom whose reflection seems to go on to infinity in the mirrors and tiles. The figurine is completely generated on the computer and plays with connotations what the human body and identity could be, whereas the modernist interior refers to the famous house E1027 designed by Eileen Gray in 1929. The extreme enlargement of the digital motif constructs an image rasterization that becomes part of the actually woven pattern. In this way, Shannon Bool’s tapestry constructs a paradoxical bodily experience between digital and real space which kind of „collapse“ within the psychological space of the beholder. 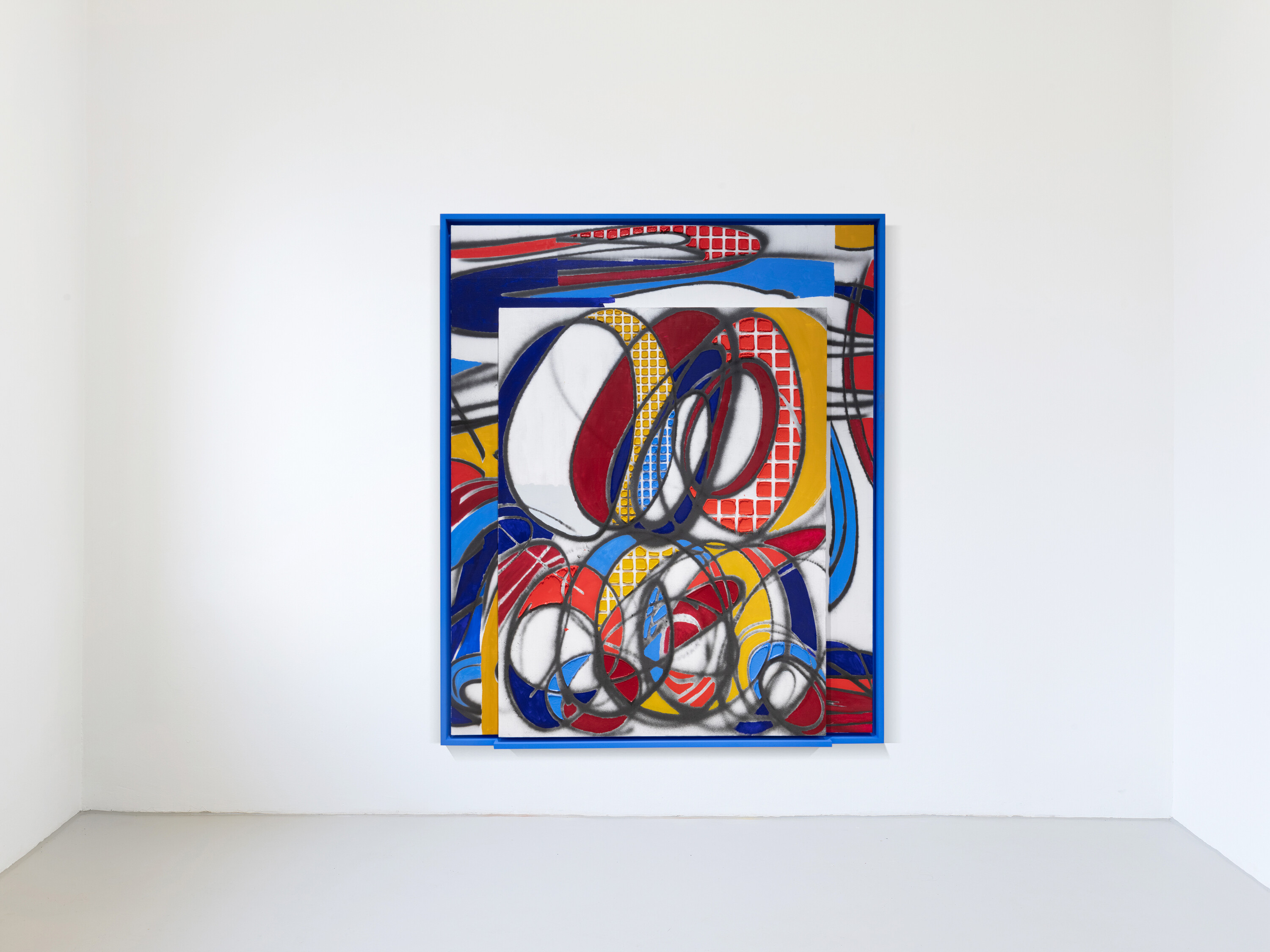 Keltie Ferris new large-format painting „FM/AM“ belongs to her series of so called „stacked paintings“ that started in 2019. This group of paintings literally extends painting to a relief like object by stacking one painting in parts on the other. The titel of Ferris´new painting „FM/AM“ refers to two kinds of radio channels and is a poetic hint to the sound and dancing like working process of spraying the black graphite lines which demands the whole body. „FM/AM“ creates a “physical contrast” between sprayed, brushed, and turpentine-obscured painting, on the one side, and relief-like elements consisting of marble dust mixed with paint, on the other. Ferris grasps painting as a personal index characterized by performative gender and body identities. 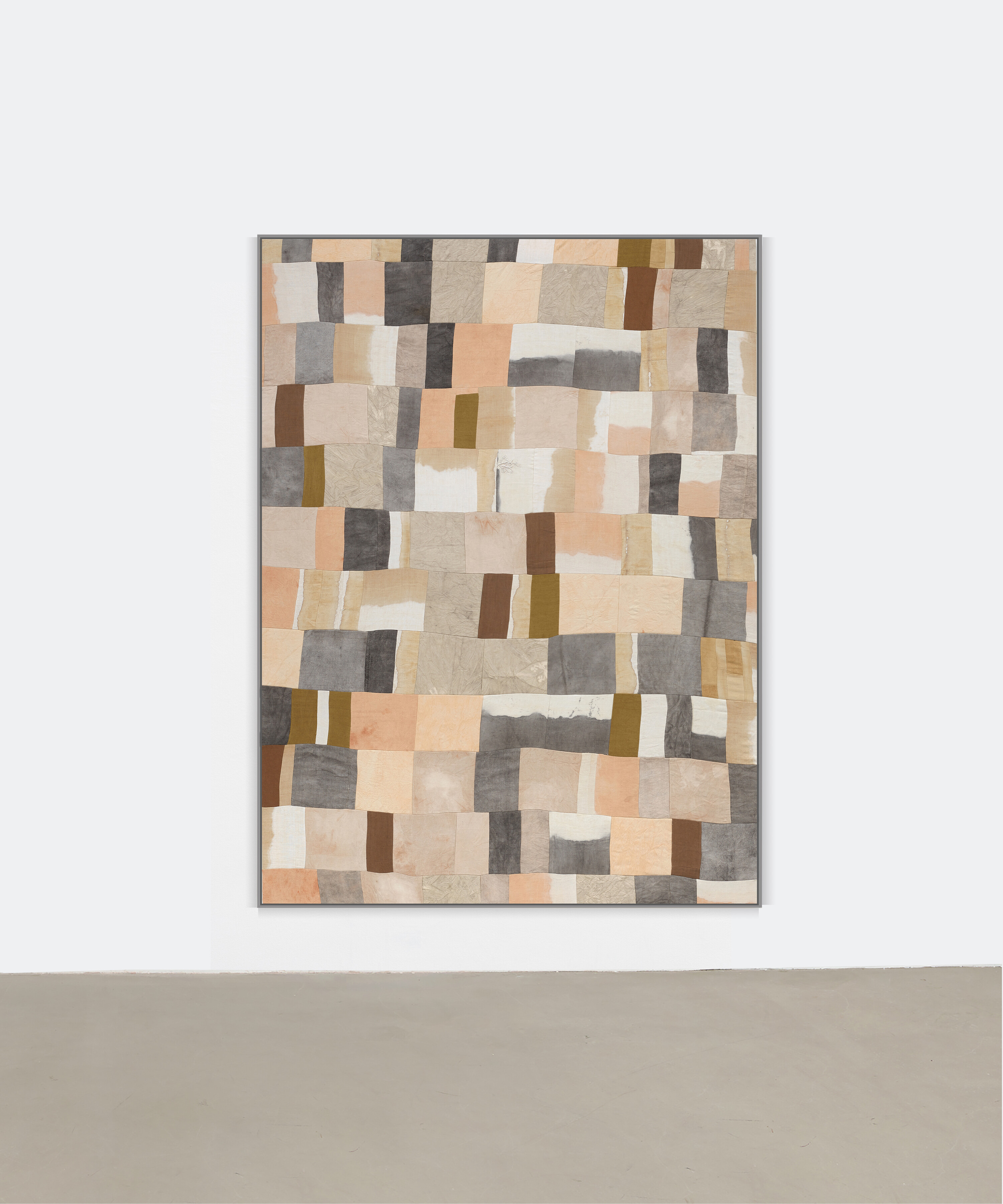 Several lands and time periods get combined in “Ravenna“ which is part of iconic series „Maps“. Composed in a strict Grid like pattern that reminds to the Grid of a map, this work combines multiple places, memories and working process related to of Ayan Farah´s travels around the world. Patches treated with mud from the Dead Sea, clay collected in Iceland, carob from Essouria in Marocco, fermented terracotta from Mexico and Italy, indian ink, or salt from the Assalt Lake Sea in Djibouti, rust that Ayan Farah gained by collecting metal objects around her house and the beach in Southeastern England, mixtures of clay and white chalk from the East Sussex Coast, marigold grown in Southeastern England and indigo grown in Stockholm Archipelago close to Farah´s parents home. This work is one of her major pieces including all aspects of Ayan Farah´s approach to art: the concept of co-existing times, places, histories and geologies. 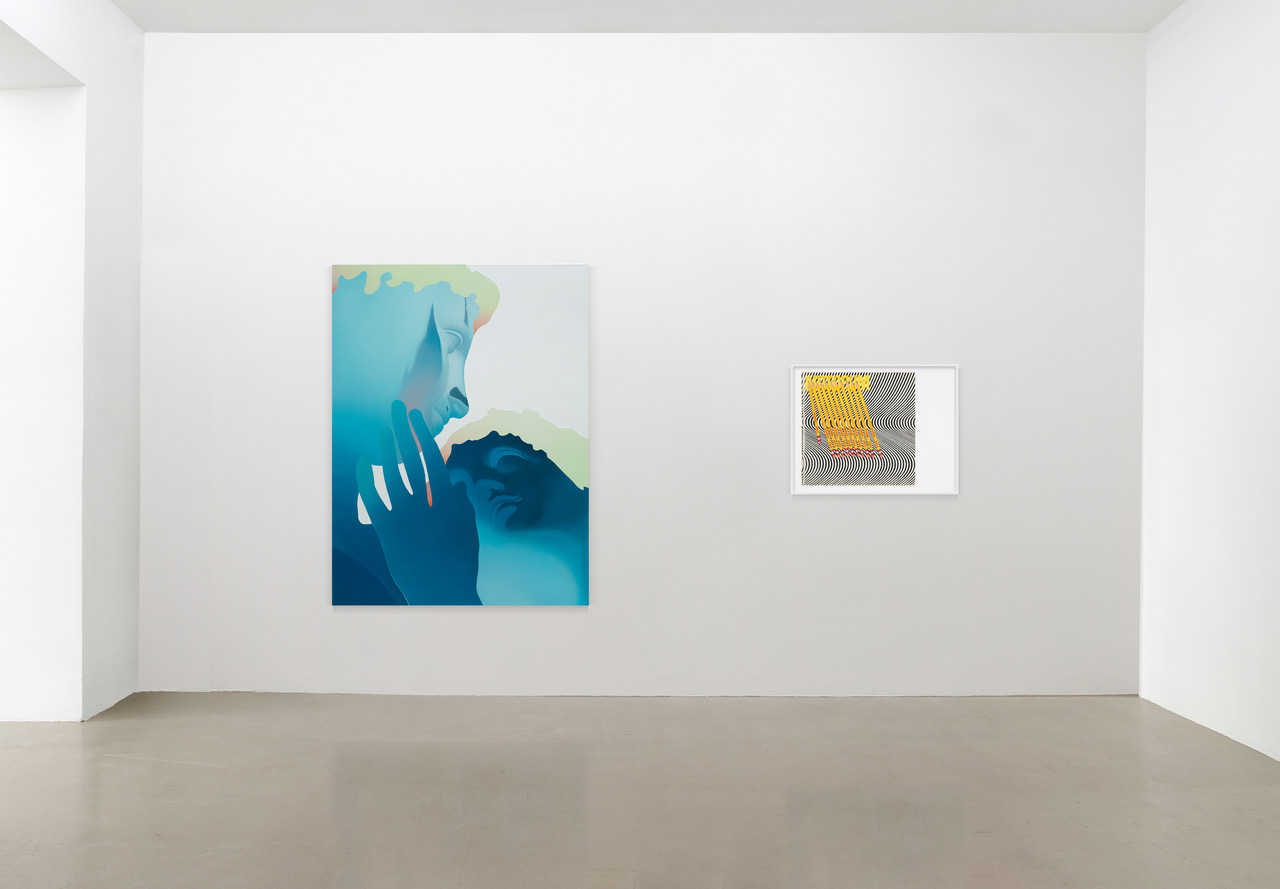 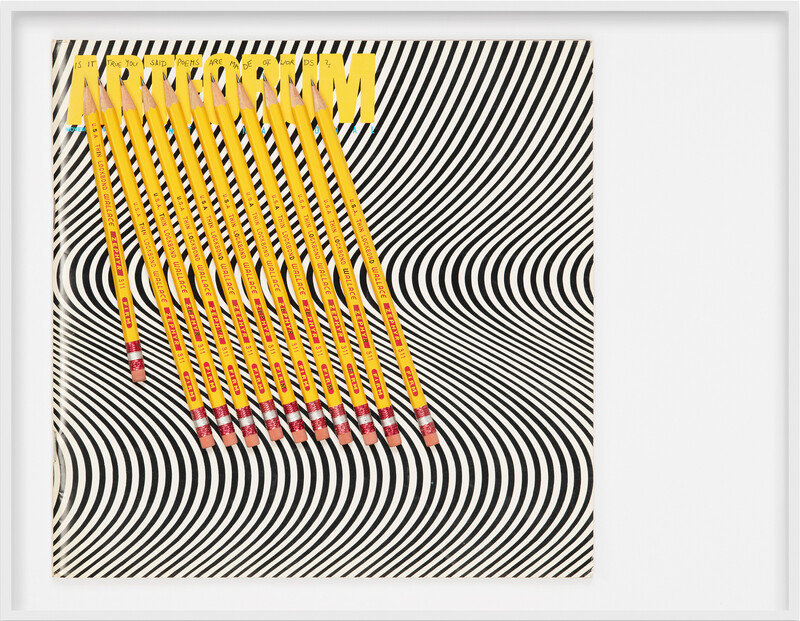 The motif stages a cascade of different definitions between the narration and objecthood of words and images. Concrete poetry by the poet Frank O’Hara meets the Op-Art abstraction of the painter Bridget Riley. The photo shows eleven vintage pencils named “Zephyr 311 Firm” from the 1960s manufactured by the American company Wallace, which are lying on the cover of the Artforum issue of November 1985, VOL. 24, No. 3, with a picture by Bridget Riley (“Crest (detail)”, 1964, emulsion on canvas). In an allusion to visual poetry, the pencils themselves are arranged in the shape of rain jets. In the inscription of the respective pencils, Czech “finds” and “marks” an anagram comparable with O’Hara’s question “Is it true you said poems are made of words?”. In Czech’s staging, Riley’s picture and O’Hara’s words are not simply “there”, but as components of a subjective construct of experience and knowledge they continuously vacillate between abstraction and narration. 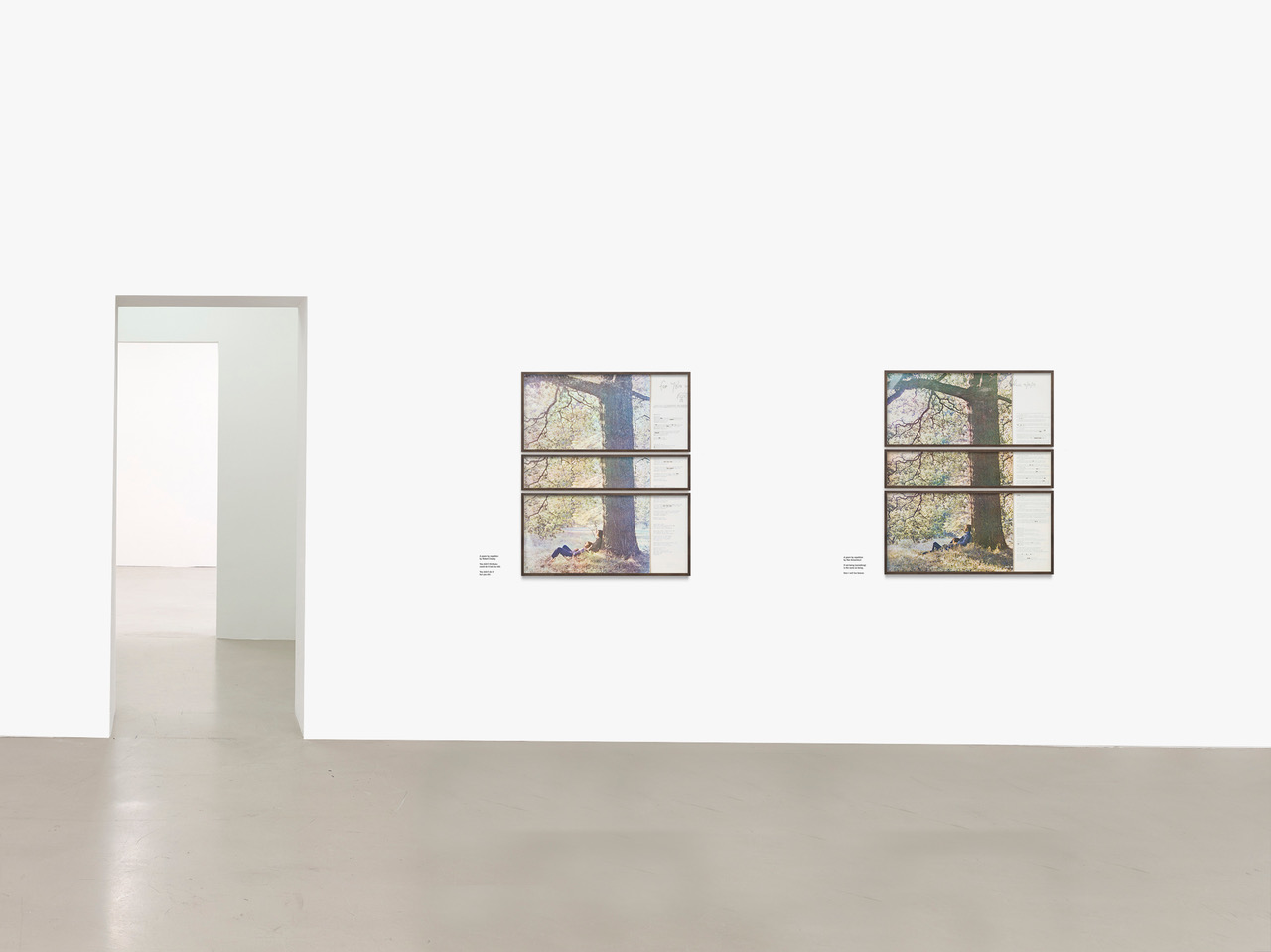 “A poem by repetition by Robert Creeley (John)” is closely related to the simultaneously produced piece “A poem by Repetition by Rae Amantrout (Yoko)”. Czech stages the solo albums by Yoko Ono and John Lennon, which were also recorded simultaneously in 1970. The original albums are already collector’s items, for although they contain different songs, the covers were staged almost identically. Apart from fine color differences, it is John Lennon who holds Yoko in his arms on Yoko Ono’s album, and Yoko who holds John in her arms on Lennon’s album. Czech stages the record by John Lennon on the inner sleeve on which the lyrics are printed. White overpainting lets the original lyrics of the songs “Mother” and “Hold On John” recede to the background, while words marked with black make Robert Creeley’s poem visible and readable. Yoko Ono’s record is also staged on the inner sleeve of John’s album, but with the songs “Working-class Hero” and “Isolation”, where reworkings and markings make the poem by Rae Armantrout visible and readable. In a pointed and poetic manner, both works use photographic, content-related and formal repetition to “narrate” the ineffable “plus” in the dialog of a romantic relationship. 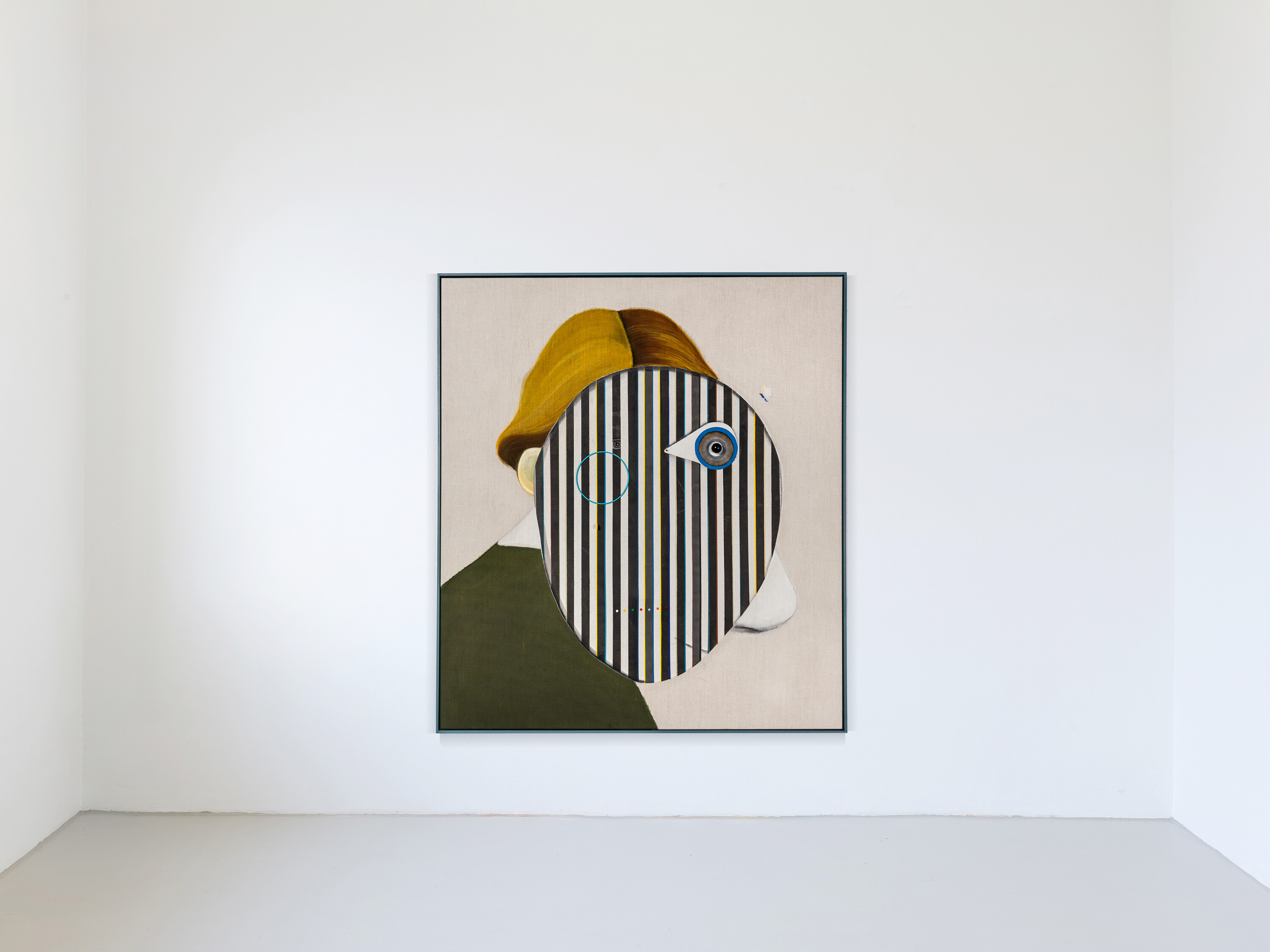 Matthias Bitzer´s new painting focus on a fine play with the dissolution of spatial and temporal orientation by combining fictional painting with real objects mounted on the canvas. However, and this makes his new works so exceptional, these real objects like balls and rings loose their original function and become abstract coordinates of new spatial realities. So what you see is a striking and at the same time subtle development of features of art historical aspects of New Realism and Abstract Modernism to a contemporary „NOW“. The motif combines and shifts several images of a portrait and spatial concepts. With a closer look, you see an eye shining through the flickering „background", whereas objects on the surface expand the painting to the real space.

In his paintings Benedikt Hipp engages with the weighing of body and mind, aesthetics and ethics, as well as the political dimension of the individual. His new painting „Running Out Of Time“ embodies all important aspects of Benedikt Hipp´s approach to painting. Painted in a time consuming and highly elaborated working process with several layers of oil on wood „Running Out Of Time“ combine elements of Modern Abstract Painting with the the concept of a synthetical „self-design“ of our time. In a stage like setting Hipp places a combination of abstract forms with a figurative like „portrait“ that together seems to be like a new kind of being. In doing so, different notions of identity collapse into each other and open the window to an utopian and contemporary space where „eveything is possible“.